Documenting the NFT journey: a journey into the future

Forward-looking: Drone light shows are nothing new, but drone-based digital signage can evolve in many ways. As suggested by a recent Intel patent, drones could be used to create mobile billboards that adapt to the environment and their audience. Not everything that gets patented makes it a real product or service, but this could one day replace certain forms of advertising that companies use today.

When Intel isn’t rejuvenating its foundry business and competing with AMD for the CPU performance crown, the company is exploring different technologies and how they can be used.

For example, Intel’s research arm has a fascination with drones, which can be used to replace fireworks and create interesting visual spectacles during major events.

In recent years, Intel has released several dazzling drone light shows, be it during its 50th anniversary or Walmart’s Holiday Drone Light Show. More recently, the company used 1,000 drones to build hype around its Arc Alchemist GPUs, but it has yet to deliver on its promise to ship millions of them to gamers around the world.

Unsurprisingly, Intel has several patents around this, but one in particular is dated January 4, 2022 – US Pat. No. 11,217.126 – describes methods and systems for providing “ad hoc digital signage” for public or private displays. The drone light shows that take minutes to complete during events require months of painstaking work designing the drone swarm’s choreography for the animations it should display, finding a suitable location and testing the deployment on site. to see if it works with an acceptable degree of accuracy.

Essentially, Intel’s patent describes ways to create a kind of drone-based billboard that can be easily moved and instantly reconfigured to display different types of ads. The methods include drones with projection systems and capturing data from various sensors to adapt to the audience and even move with it as needed.

For situations where space is at a premium, drones would scan the geometry of the environment and adjust the projection size to a smaller area. For areas where larger projections are possible, multiple drones can work together to compose a seamless digital signage, and one would act as a helper to adjust the viewing angle of the projection and measure the audience’s level of interest.

If the signage does not attract attention, the piloting drone may change the content displayed by the other units.

The projection surface can also be ad hoc, in the sense that a drone swarm can split into two groups: one to roll down a canvas and one to project onto it. There are even details about a spatial audio system for video ads and ways to tailor the content to the mood and general interests of an audience.

If this sounds crazy, it was only a few years ago that a Russian startup called StartRocket thought about using satellites to light up the night sky with ads. Yet this all trumps the weird factor of “moonvertising” — the idea of ​​using robots to draw ads on the moon’s surface.

Fortunately, even Intel’s relatively terrestrial idea of ​​drone-based advertising revealed in the patent has yet to materialize in a real service. At the time of writing, the company offers drone light shows that cost between $99,000 and $299,000, as well as custom plans for large projects involving thousands of drones.

These drone light shows are being marketed as an alternative to fireworks because they are supposedly safer, cleaner, quieter and more environmentally friendly.

was original published at “https://www.techspot.com/news/94140-intel-patent-suggests-drones-may-used-create-mobile.html” 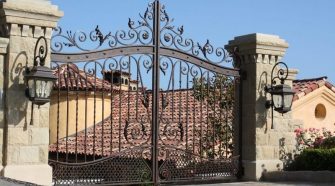 How A wrought iron gate Makes Your House More Secure