DAOs could revolutionize the way startups are run

Zimperium, a provider of security for mobile devices and apps, today announced an agreement for Steven Mnuchin’s investment firm Liberty Strategic Capital to acquire a majority stake in the company for $525. The company now aims to accelerate its growth and has talked about pursuing an IPO in the future, CEO Shridhar Mittal told VentureBeat.

Mnuchin – formerly the US Secretary of the Treasury and now the founder and head of Liberty Strategic Capital – will serve as chairman of Zimperium’s board of directors in connection with the deal. The acquisition is expected to close sometime in the second quarter.

According to Proofpoint, in 2021, 74% of organizations experienced SMS phishing attacks, or “smishing” attacks. That is compared to 61% in 2020.

Zimperium, meanwhile, has reported that zero-day vulnerabilities actively exploited against mobile devices are up 466% by 2021.

As threats such as mobile phishing and zero-day attacks targeting mobile devices have increased, “they need to be protected when corporate data is accessed on these devices, just like PCs and Macs,” says Mittal.

In the field of mobile threat defense (MTD), which is used to secure mobile devices such as smartphones and tablets, Zimperium differentiates itself by offering on-device threat detection, Mittal said. The company’s machine learning (ML) technology detects attacks on the device itself without having to send data to the cloud. This has benefits, including better privacy of user data and reduced latency, Mittal said.

By contrast, most of Zimperium’s competitors in MTD rely on the cloud, he said.

“They’ve started doing things on the device. But it’s not easy,” Mittal says. “We’ve spent years looking at data and creating those machine learning models and using all kinds of different techniques to make this possible. This would be a very difficult problem for all our competitors to solve very easily.”

Meanwhile, in the field of app security, Zimperium provides app development teams with a scanning engine that can automatically detect issues such as vulnerabilities and policy violations, and enable teams to fix these issues early in the process, he said.

Other capabilities include code protection (through code obfuscation) and runtime defense with anti-malware functionality, Mittal said.

Zimperium now has 500 enterprise customers and more than 7,000 total customers.

The Dallas-based company reports it has generated 53% growth in annual recurring revenue (ARR) by 2021 and aims to grow its ARR even faster by 2022, Mittal said. The company has not disclosed its total revenue or ARR figures for last year.

In MTD alone, “between us and our competition we have barely penetrated the US market,” Mittal said. “So there’s a huge potential.”

The acquisition deal with private equity firm Liberty Strategic Capital came about as Zimperium assessed its financing options to drive the company’s next growth phase, he said.

Zimperium currently has 250 employees. In addition to hiring, the company plans to make acquisitions in its core areas of MTD and app security, Mittal said.

IPO in the cards?

The company may also consider going public, given the tremendous opportunity for growth ahead and the company’s differentiated solutions, he said.

While no timetables have been discussed for an IPO, “we have discussed the possibility,” he said. Down the road, “we would definitely consider that,” Mittal said.

Under the agreement, Liberty Strategic Capital will not own 100% of the shares in Zimperium. An investor, SoftBank Corp., is holding onto its stake in Zimperium, as well as members of the company’s management team and employees.

Zimperium has not disclosed what percentage of its equity will be acquired by Liberty Strategic Capital under this agreement, or what the company’s overall valuation would be in connection with the deal.

Liberty Strategic Capital has made investments in several cybersecurity companies since its inception in 2021, including Cybereason, Contrast Security and BlueVoyant.

This post Mobile security firm Zimperium to be acquired for $525 million, eyes IPO

was original published at “https://venturebeat.com/2022/03/29/mobile-security-firm-zimperium-to-be-acquired-for-525m-eyes-ipo/”

Report: 95% of IT leaders believe open source tools are essential for strong infrastructure 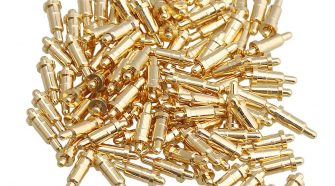 What Are The Features You Enjoy From Pogo Pins