The advantage of virtual shopping centers is that they do not run out of space. One such example is TheMall, which will debut later this year and will eventually have 100 floors and 100 million square feet of space.

Alan Smithson’s MetaVRse company has been working on TheMall for seven years. In an interview with GamesBeat, Smithson said he expects to launch the mall in the fourth quarter of 2022. It will be accessible on the web without the need for a download or an app or any special hardware platform. And it will use blockchain technology.

Smithson started the company with Julie Smithson in 2015 and incorporated the company in the spring of 2016. They put together a team including Paul Konieczny, CEO; Walid Abdelity, head of technology; and Stefanie Smith (formerly Ikea), president of marketing. They built an engine to run the mall on the web in 2020 and continued to work on it, producing a second engine for this year’s launch with better graphics.

“Our goal is to be the No. 1 retail and entertainment destination in the metaverse and we believe that by starting with the familiar we can bring in people who are not crypto natives,” Smithson said. “We weren’t focused on cryptobro culture at all. We want to involve ordinary people and it starts with video gamers and then moves on.” 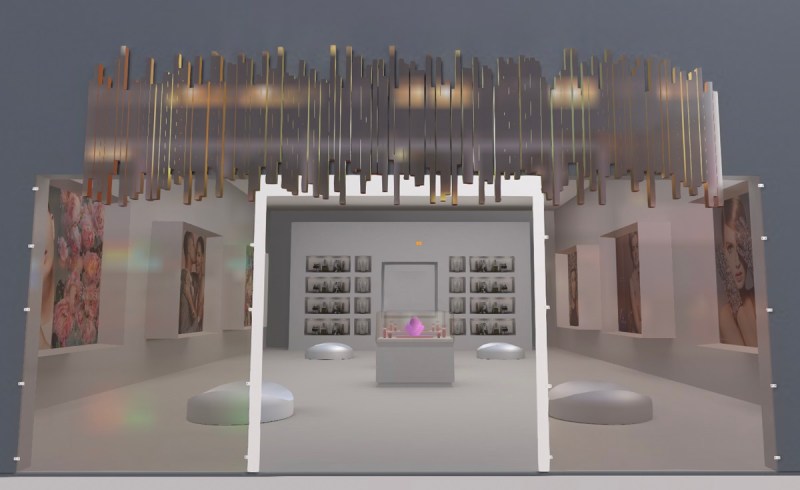 A fashion store in TheMall.

I’ve seen a demo of it and the images look pretty sharp. I logged in over the internet on my laptop and it worked fine.

A demo of a motorcycle in a shop had some interactive parts that moved. But you can still see the tradeoff between focusing on web content versus taking advantage of advanced game engines and dedicated hardware from consoles or gaming PCs. TheMall is not designed for hardcore gamers in that sense, as it is not as interactive or realistic as an Unreal Engine 5 game.

“Obviously this isn’t an Unreal Engine as we’re running on a mobile browser. But one of the things we’re introducing in version two is that we’ve discovered multithreading in the mobile browser. And so there are some different really cool innovations that we had to make to make millions of polygons appear in a mobile browser without melting your phone.”

Smithson chose to target the widest possible audience on the web, who may be using older smartphones or other non-gaming devices to access the place. TheMall has both digital goods that you can buy as well as physical goods or digitally delivered goods.

Over the past six years, the company has hosted many training and marketing events while building the platform. Then the metaverse became fashionable during the pandemic as people longed for better ways to connect than Zoom video calls. Worlds like Decentraland, The Sandbox, Roblox and Minecraft got a lot of momentum. 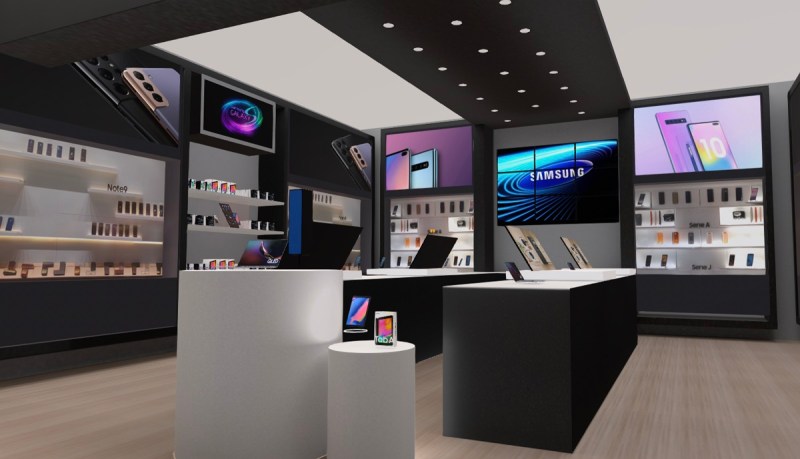 An electronics store in TheMall.

But unlike those worlds, Toronto-based MetaVRse chose to focus on images that looked more realistic rather than blocky, with more attempts to show what real stores and products would look like.

“Why do they look like they’re using images from the 1990s?” said Smithson. “We realized that we can do much better on the web. And so we started building our own kind of experience called TheMall.”

And while the web-based images still have their limitations, Smithson believes they are quite revolutionary in terms of use to create such a large space. The company uses its own custom WebGL layer. And with one graphical trick, TheMall can represent an object with 21,000 polygons as a one-megabyte piece of data.

This makes it easy to zoom in on data, yet move around an object or zip through the mall. It is aimed at iPhone 6 or newer devices. Much of the art is built in-house with Adobe Substance.

“When fully built, it will be 100 million square feet. And to put that in perspective, the largest mall in the world is the Mall of Dubai, and it’s 12 million square feet in size,” Smithson said. “So this is about eight times bigger.”

The company will sell approximately 70% of its 100 floors as non-fungible tokens (NFTs). Developers can then customize the floors and engage brands and experience centers. About 30% of the floors will be sold to investors who can resell their purchase, as the company wanted to create a liquidity option for floor owners.

“We didn’t want people to build anything on their floor because you don’t want a whole mall full of speculators,” he said.

“Our goal is to be the No. 1 retail and entertainment destination in the metaverse and we believe that by starting with the familiar we can bring in people who are not crypto natives,” he said. “We weren’t focused on cryptobro culture at all. We want to involve ordinary people and it starts with video gamers and then moves on.”

You can view the mall in third person or first person. TheMall is truly a community creation tool and platform. 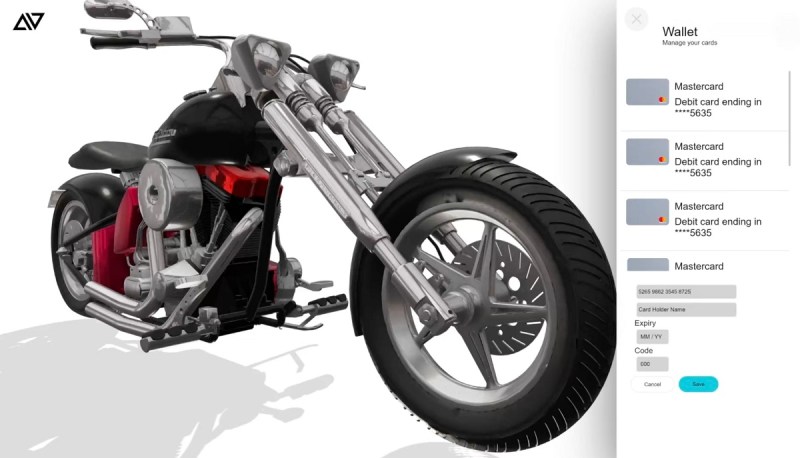 A motorcycle in TheMall.

“TheMall is our Fortnite for shopping rather than shooting,” he said. “Brands have the opportunity to create their own brand environments, exclusive events or exclusive merchandise. They can mint NFTs, create interactive games and measure success by the time they spend at the mall. There is a direct correlation between the amount of time a customer spends in a mall and the amount of money he spends within that structure, with the different suppliers.”

Smithson hopes to partner with brands to create celebrity experiences that are always changing. MetaVRse plans to use AI algorithms to better personalize buyers. If you are interested in cars, you can go to the floor with cars on it. It provides recommendations based on loyalty programs where shoppers can sign up. (Smithson said it would comply with the European General Data Protection Regulation).

“We’re going to have a standardized way for brands to make garments and decorate the different things,” Smithson said. “We also want to natively accept the ReadyPlayerMe avatars. They do work in our system, no problem. We have fully tested them.”

And TheMall will have security protocols for more secure transactions.

“We will be Kronos compliant, which is quite interesting,” Smithson said.

MetaVRse has built its own avatar system from scratch and hopes to create a global standard for brands to make clothing, be it wristbands, bracelets, necklaces, earrings, hair, accessories, shirts, jackets, pants, shoes or belts. You can mint the avatar as an NFT. Each consumer will initially be able to invite 10 friends.

“Our goal is to make really photo-realistic products and stores, or as photo-realistic as we can be,” Smithson said. “Obviously this isn’t an Unreal Engine as we’re running on a mobile browser. But one of the things we’re introducing in version two is that we’ve discovered multithreading in the mobile browser. And so there are some different really cool innovations that we had to make to make millions of polygons appear in a mobile browser without melting your phone.”

TheMall’s low-code developer tools also make it easy to create a store and customize it after it’s created. The tool has a drag and drop interface. Developers can divide floors into 10,000 square meters of stores. And stores can run videos in their stores.

TheMall hopes to encourage good behavior by ensuring that the system is not completely anonymous. It can accept crypto payments using a vendor called Bitpay, which gives access to 95 different wallets and 15 cryptocurrencies. You can also pay with your credit card through Stripe. 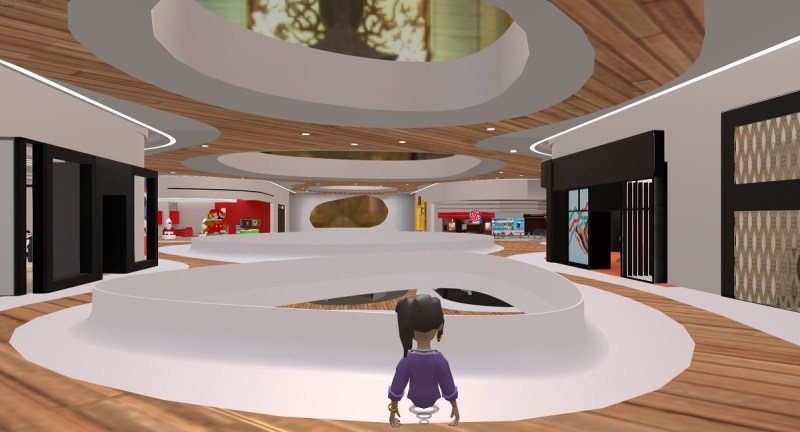 A shopper’s opinion of TheMall.

“Brands have complete control over their design and we are committed to a brand-safe environment,” said Smithson.

For shopping in the mall, MetaVRse charges a 3% commission, as opposed to 30% for the App Stores. That way, Smithson hopes it will be disruptive. And for developers, TheMall gets 3% of the lease fee. The starting price for a floor, with a million square feet, is 100 ETH (in the Ethereum cryptocurrency), which is about $300,000.

“Our goal is to be accessible anywhere, and because it’s in a browser and works on mobile and desktop computers, it can reach about 7 billion compatible devices,” Smithson said.